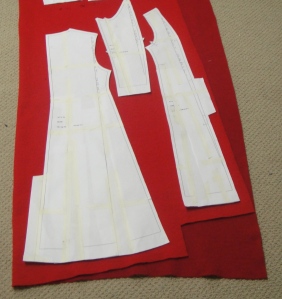 Very glad I took the time to thread-trace along a rib. Presumably this stuff was knit in the round and then sliced. I really wish they’d just leave it in the round. So many more options that way.

Thread-tracing along a rib of the knit to find the grain.

I also took the lining pieces and compared them to the shell pattern pieces to see which adjustments I needed to make to them. The coat body lining was pretty easy, but the sleeves were weird. I have always been under the impression that lining pieces should be, if anything, a tiny bit smaller around than the shell pieces, since they go inside—turn of cloth and all that. With the exception of the back pleat, I know. Well, the sleeve lining pieces were wider. Or at least, they were until I added the 1 cm width to each sleeve piece. Now they’re pretty much (I would say) bang on. Am I missing something? Are they just oddly drafted?

And here’s another question for those of you who actually know what you’re doing! The under-collar (separate pattern piece) is drafted to be cut in two pieces, with a seam down the middle. Now, it was my understanding that you do that when cutting the under-collar on the bias (the grain-line shown is straight). So I was thinking about cutting it on the bias anyway. But then I remembered that my fabric is a knit, which doesn’t need bias to stretch/drape nicely. So maybe it doesn’t matter. So—can anyone enlighten me on exactly WHY one cuts the undercollar on the bias, and whether one would bother in a knit, and if one didn’t bother, would there be any point to cutting the under-collar in two pieces, or should I just cut it on the fold?

Tomorrow: Cutting, interfacing, and how much couture does one kids’ coat need?

Tagged as a coat for Tyo, coat, coats, For Tyo, in progress