The school bus schedule changed today, and according to Tyo the bus would be coming five minutes later as they are now the last stop to get on before the bus goes to the school. So we went out five minutes later than our usual time.

And, naturally, the girls missed the bus.

Now that the weather is no longer motorcycle friendly, we are back to being a one-vehicle family, which means my hubby takes off at 7:00 am with the car. Which leaves me with two kids and a complex web of public transit between us and the school. It’s not actually that far as the crow flies, but the buses and train just don’t connect well.

So we trudged off towards the nearest city bus stop. While I was inside the 7-11 getting change to get the girls on the bus (I have a pass as I take public transit to work), the bus came and went (not one that would take us right to their school, but within about a 10-minute walk at offpsring-speed). So, swearing quietly (me, not the kids), we trudged the block further to the train station. The train doesn’t go to the school, but it does go to a stop that has other buses that go by the school. We caught the train, although each of their tickets cost me extra because I still didn’t have quite the right change. We went to (what I thought) was the stop. We waited. Eventually the bus with a number we wanted came. We got on the bus.

The bus proceeded to toodle around in exactly the wrong area for about 40 minutes, before dropping us back where we started. Apparently it had the right number, but the wrong name underneath (usually this means that it’s going along the same route in the opposite direction, so it’ll still get you there EVENTUALLY. Apparently not in this case). It’s really embarrassing getting off a bus at the exact same stop you got on at. Ah, well. At least it gave us a chance to drill Syo’s spelling. She managed to score 0/10 on her last weekly spelling test. I think that takes talent, don’t you?

It takes about 20 minute to walk from the train station to the kids’ school. It only takes about 45 minutes to walk all the way from our house to the school. Granted speeds with offspring in tow are still a little less than optimal, but they’re not that bad. I got the kids to school an hour and a half after they first missed the bus.

So on the way home (walking) I stopped at Value Village to console myself. I staunchly resisted the several colours and weights of denims, and some rather interesting brocades. I did succumb to this rather lovely grey/cream wool (on the left in the top photo—would’n’t that make a lovely spring jacket?) and two packages of vintage zippers, still in their little paper cases. Including a bunch of invisible zips, which I don’t have any of. And a bleached old blue flannel duvet cover that will do nicely for the next round of muslin/underlining for Tyo’s coat (on the right).

Whenever I can get the pattern printed.

These zippers are really darling. 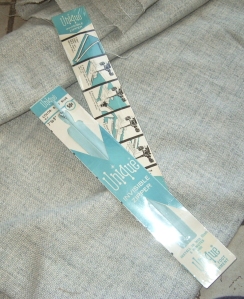 And don’t they come in the most adorable little packages, complete with instructions inside? 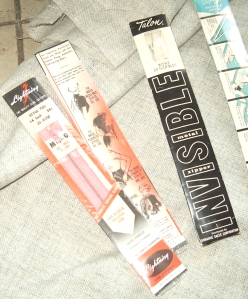 More zips... the oldest, if price is a guide.

I really do hope I can convince myself to use them. Something about that old packaging is so precious…

Also, it occurs to me that I somehow missed out on the obligatory “Hallowe’en Post”. So here’s a picture. The only actual sewing I did was Syo’s red gauntlets (well, and the jacket Tyo used, but that was last summer and thoroughly blogged already). Syo’s costume wasn’t really warm enough… I should’ve made her put another layer underneath the shirt, even with the very mild weather we had on Sunday. She was pretty cold and grumpy by the time we got home, which is when this picture was taken.

The Zombie Punk and the Fire Fairy