I may have mentioned before that my sweet little Tyo has the build of all the women in her Dad’s family (and diametrically opposed to the women in mine, I’ll add): she is an incipient pear. Narrow shoulders and BOOTY. This has been apparent since she was, oh, two, but it’s only getting worse as the years go by. Let’s just say I could picture rap videos in her future. And a lot of quality time with the shotgun in her Dad’s.

So, I have to say, the muslin for the coat went together like a dream. The pattern is (surprisingly?) sophisticated, with separate lining pieces for everything. The overall shape looks good, all the seams (that I tested) match up beautifully; the sleeve-cap is drafted with a beautifully small amount of ease, just enough to curve it nicely without giving it any tendency at all to pucker (admittedly, the wonderful old flannel sheet I was using for the muslin was a dream to sew, too, so that didn’t hurt)

And, as you can see, it’s just a wee bit too small. Everywhere except in the shoulders, which are perfect. (The sleeves are long enough only because I lengthened those pattern pieces BEFORE cutting it out, as I could see they were going to be too short. Unfortunately paper-printout doesn’t lend itself to tissue fitting.)

Now, I can’t be 100% sure this is a problem with the original sizing, as it’s entirely possible my crude efforts at tiling let to some re-sizing of the printout and there’s no handy-dandy scale square to allow me to be sure (actually, according to the tiling program my printout is .01 feet smaller… which I didn’t think could throw it off by this amount, but anyway). But the fact remains that there is definitely not enough ease in the pattern AS I PRINTED IT OUT. Well, there would be if it were a dress. For a coat… not so much.

If it were just the skirt pieces that were the problem, I would just spread them. In fact, before I got the sleeves on, when 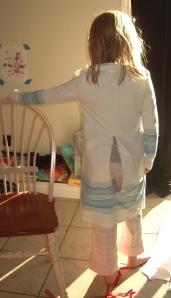 she first tried on the body and it became obvious that the skirt of the jacket didn’t have enough ease for her lovely bottom, I was all set to slash and spread the skirt of the back pieces, just enough to give her a couple of extra inches in the derriere region. But with the sleeves in place, it became evident that some extra ease was required there, as well.

So I’m torn, folks. What’s the best way to proceed? Re-print in a larger size? Slash-and-spread to widen sleeves, armscye, and the lower part of the coat, preserving the fit in the shoulder?

There’s only one part of the pattern that has confused me a little. Along the front princess seam there are two

expansions (places where the seam allowance goes from about 1 cm to 4 cm. The top one is for the placement of the pocket, but below that the seam allowance returns to normal for about an inch, and then widens again I’m not sure what’s meant to go there, as it doesn’t appear to be any different from the rest of the seam on the illustration (or the limited instructions available on m-sewing.)

It does resemble nothing so much as a vent or pleat, though I’ve never seen one in this precise location on a coat. What do you think? Ignore? Make as a vent or pleat? I should add that the lining doesn’t have an opening here and the seam between the CF facing and the lining does not coincide with this princess seam, either. So maybe that eliminates the vent option but still allows the pleat? I dunno. Anyway, if anyone has any suggestions or revelations, I’d love to hear them. Or I can just ignore it ;).

Probably I should go up a size, right? Bigger is always better with kids. (D’oh!)

7 responses to “Dear Tyo, I foresee…”