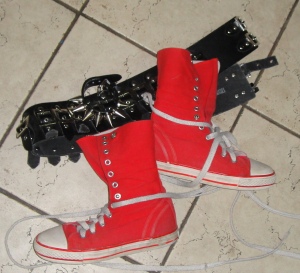 Not necessarily in that order.

So this is what it feels like when your sewing mojo takes a break, eh? I have, honestly, been waiting for this (so has my husband… he’d been feeling rather neglected). I’m not gone, but I’m definitely not feeling the itch every spare moment. I tend to cycle in my hobbies… drawing, writing, sewing, dancing… so it was probably inevitable that the sewing would ebb at some point. I’ve been writing, a bit more, though I kinda feel like I should save that for NaNoWriMo coming up. At which point the sewing may really fall off ;). Mostly I feel bad for abandoning the Lady Grey sew-along, but at the same time I haven’t had the money for ANYTHING, never mind the kind of expensive quality materials I want for my Lady. At the same time, though, I won’t really need the coat until spring… so maybe I’ll get on it after Christmas. Broke-assedness really is our basic state of being, but it’s been even tighter than usual the last few months (going to Pittsburgh didn’t help, either… hopefully I can get reimbursed for the flight at least). So not only have I NOT spent my 50% off coupon for Fabricland (expires at the end of Oct.) on 5m of red wool melton (and believe me it’s been in my fantasies), I haven’t even been able to justify spending it on five metres of some comparatively cheap-ass fabric. /sigh. Maybe when my next paycheque comes in… (I’ve been saying that for almost two months now). Add to that, our printer has run out of black ink, so I can’t even print off free patterns at the moment lol!

Although it’s not precisely sewing (it could’ve been, but I resisted), we are in the throes of

assembling Hallowe’en costumes, natch. Tyo is being a zombie punk, while Syo wants to be a Fire Fairy. Today we went and blew the (small) Hallowe’en budget at Value Village: red fairy wings, a couple of wigs, assorted oddments, and skinny jeans for Tyo.

Tyo, bless her individualist little heart, is the only girl in her class (possibly in her school) who has not fallen for the lure of skinny jeans. I quote the following conversation from sometime last winter:

Syo (aged six at this point): I love skinny jeans!

Tyo: yeah, but on everyone else they’re ugly!

However, Tyo wanted to be a punk last year, wimped out and did a pirate, so this year she was really set on the zombie punk. And while there MAY be punk fashion that doesn’t require skinny pants, that’s definitely the stereotype.

I’m not sure if watching a kid who hates skinny pants try on fifteen different pairs in the search for a set she can stand was hair-pulling annoying, or just amusing, but anyway, she finally found a black pair. They’re capri length but as she’ll be wearing her extra-tall high-top runners with them (see above), it’ll work. They weren’t plaid, but, well, you can only expect so much from Value Village. Especially the week before Hallowe’en. (Most stores do all their business at Christmas. I suspect Hallowe’en is Value Village’s equivalent).

Oddly, the fabric selection was better than I’ve seen in some time. I walked away with a mass of black sweatshirt material (something I’ve been looking for for a LONG time but was reluctant to pay $20/m for at Fabricland), and this peculiar tube almost-sweater-knit. It doesn’t feel super nice, but I’m thinking it could make a nice wrap/cozy—another Simplicity 2603 or similar.  There was also a mass of nice sturdy heavy denim (non-stretch) that I’ll get if it’s still there come payday. I hate being broke. There was a bunch of other stuff there today that I need/would like to get (kids’ baseball bat, kids’ winter jacket, scarves and toques, skates for the winter…) but the budget just isn’t there. I hate not being able to afford the five bucks it would take, especially at the thrift store where you really can’t count on something equivalent being there in two weeks when I DO have money. Anyway, enough whining about cash. The end is in sight (or so I tell myself) and it’s not as if we’re going to starve to death or lose the house.

The patterned fabric on the left is actually one of Syo’s picks, bought to play with to replace the yellow border print I made into her sundress. It’s an awful poly-lycra knit, thin and slippery, with a crazy print (I’m not a print person, if you haven’t noticed)… and yet… and yet… I keep picturing it as a shirt. Something with a cowl neck or some fun draping… maybe ruching…

Maybe it’s just the lure of the forbidden. The one piece of fabric I’m not really allowed to use up for myself…

Anyway, I think I will sew something tomorrow. Not sure what. Maybe play with my new fabrics. I’m tempted to turn the sweatshirt material into a “kimono bunnyhug,” not least because those of us who actually know what a bunnyhug is need to stick together ;). Or I could try and make my wool pair of pants. That’s pretty tempting, actually. I haven’t done anything else (like put pockets on) with the ones I made last week, not least because Tyo’s preparations for her costume have involved a LOT of red paint which she managed to get EVERYWHERE… including on my new pants and and my hubby’s white shirt. Grr. So some quality time with the oxy-clean is in order :P.

We’ll see. Am I mentally ready for welt pockets? hmmm….

Tagged as fabric, Hallowe'en, mojo, too much talk

12 responses to “Hallowe’en, Lassitude, and poverty”