Home (and speaking of pants…) 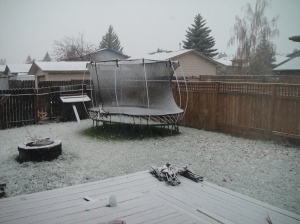 My back yard, Friday. There was actually quite a bit more snow an hour later, but I didn't take a second picture.

Well, I made it back, just in time for two inches of snow Friday.  /joy.

I did not, sadly, get to do any fabulous fabric (or button) shopping in Pittsburgh. We did walk up the Strip district once, and I

Pittsburgh. Note the complete and total absence of snow.

spotted at least one neat-looking fabric store along with several other interesting looking shops, but it was ten o’clock on a Tuesday night, so there was no awesome fabric-shopping for me. I did score a few books I really wanted, but I suspect “Major Transitions in Tetrapod Evolution” really isn’t your cup of tea, so I’ll spare you the review ;).

Yesterday, rather spontaneously and with my typical lack of forethought, I decided to tackle pants. Pants which are neither jeans nor stretch.

I started with the Burdastyle Ellen pattern. Compared to, say, the JJ, there are remarkably few versions of this on Burdastyle, but it seemed to fit the general bill of “pants that are not jeans and not stretch”: no yoke,  rear darts, a slightly higher (though still lowish) rise, and a close-fitting but straight, rather than skinny, leg. And Burda usually has a good reputation when it comes to pants drafts. I actually use a modified version of the Ellen waistband for my jeans, so that wasn’t a complete guess, either.

The main charm of these pants are the cute little patch-pockets with the unusually shaped flaps, which I conspicuously failed to include in my pair, mostly because it’s hard to spend that much time on details of a pair of pants you’re not even sure will fit.

For the sake of full disclosure I’ll reveal that this is another attempt to pretend that I am, all measurements to the contrary, a 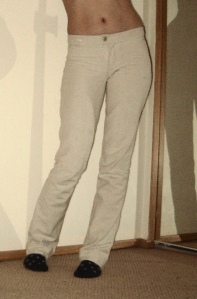 Burda size 34. This time because several people on Burdastyle had mentioned that the pattern seemed much roomier in real life than it looked on the model. This seemed a little too snug through the hips when I tried it on, so I let it out a bit at the side seams (below the waistband), but then it was too loose, so I took it in again. The waistband is snug, but that extra overlap you see beyond the fly shouldn’t actually be there, so if it weren’t I think the sizing would be basically perfect. (I’m not quite sure how it worked out that way, either, since the waistband is in four pieces that match to the side and back seams, and I only had the overlap on one side of the front. Probably something to do with my sewing of the fly). I also added an inch to the length (it seemed ok, but better safe than sorry, right?), which probably wasn’t strictly necessary but did allow me to put a nice, wide hem on the bottom. I did a small swayback adjustment to the waistband, which is deliciously easy when you have a centre-back seam.

Overall I’m passably happy with the attempt.  The fabric I used (an ex-curtain) is, on second thought, a little thin for bottoms, and it seems to bag out a bit; these pictures were taken after a few hours of wear and the knees are distinctly pouchy. In my haste I neglected to interface the fly region (actually, I neglected to read the instructions completely…), so the gaping there is entirely my own fault. The fly installation is not my best, but certainly not my worst yet; once again I followed Debbie Cook’s tutorial. I really like hers for some reason (though I use pins instead of the wonder-tape), though I wish it covered the fly shield. I always forget that part and then it ends up being a bit fiddly and weird.

So that was my weekend’s sewing. I have a feeling my days of daily sewing posts are going to be on the wane for a bit… I don’t even want to think about the amount of work I have to do this month (how did it get to be almost Halowe’en?!?), and November is NaNoWriMo and then it’ll be Christmas… Hopefully once or twice a week will be enough? (Y’know, when I actually have something to talk about? 😉 )

Now, to decide whether to bother putting the patch pockets on the pants…

22 responses to “Home (and speaking of pants…)”