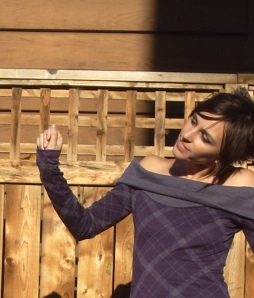 So last weekend I “splurged” on this purple plaid-printed knit. One whole yard, costing a whopping $2.50 (I would’ve gotten more but let’s face it, how many outfits in a fabric like that can I get away with? Although, I suppose I could’ve made stuff for the kids). It’s a fairly thick, stable knit, a little too polyester-feeling but not awful, and decent recovery. There’s some kind of flaw in the pattern-printing (doubtless why it’s in the clearance section) but it mostly only shows on the reverse (plain, light purple) side, so I was able to ignore it for the bodice pieces.

But I didn’t want to do just another boring Lydia. The plain, scoop-necked Lydia is great in solid colours I’ll layer under stuff, but for something striking like the plaid I wanted more of a statement pattern, something that would stand on its own. And one of my regrets from Self-Stitched September was not getting much use of my cowl neck tops, due to their sleevelessness*. (Due to the knit, they wouldn’t drape nicely over one of the Lydias, I think.). I considered re-drafting a cowl-necked version of the Lydia (honestly, this would not be hard.)

Then, I threw caution to the wind, re-traced the sleeve from my Lydia, measured the armscye, chopped off the top of the sleeve, and added the sleeve to the Manequim cowl top.

I was pretty sure I wasn’t capable of making the cut-off top of my sleeve match with the horizontal “shoulder” of the cowl top, so I

peekaboo shoulder: I bound the top of the sleeve and finished the cowl separately.

kept them separate. In theory that means there’s some potential for cute shoulder peekaboo; in reality, the way the cowl has ended up sitting makes this unlikely. Whatever.

It took a fair amount of mental gymnastics to get the pattern working this well—there are certainly a number of places I could’ve measured better, remembered what my seam-

allowances were, etc. Also the original pattern has a lower armscye (typical for sleeveless patterns, I think), and adding sleeves to it really pulls it up and into the armpit oddly. Not uncomfortable, but weird if you think to look for it. On the upside, something about the close fit at the armpit means that so far this top is completely resistant to sliding up onto the shoulder, unlike every other off-the-shoulder top I’ve ever encountered.

I used the wrong side of the fabric for the contrasting cowl-neck.

The only downside, at the moment, is that the broad, off-the-shoulder cowl neck pretty much negates the added warmth given by the sleeves. I am COLD!

I should add for the sake of the free-pattern-grubbing masses (like myself), that while this pattern is based on the pattern here, I totally messed with the bodice, so really the only relevant piece from the original pattern is the cowl/drape itself. You’ve been warned. I also lengthened the bodice (I had kept the original length the first time) by 3 cm, and it’s better but still a bit short for my liking, especially since I haven’t hemmed it yet. I was about to, but my twin needle decided to break going over the first side-seam. Really, it’s done quite well—none of my previous twin needles have survived more than one or two garments at most before I managed to break them—but it means the shirt won’t be getting hemmed for, oh, another few weeks.

Also, look at that! RTW jeans! And honestly, this is the only pair of the RTW pants I missed, the whole month of Self-Stitched September.

*now, historically I have worn plenty of short-sleeved and sleeveless tops all through the winter. Rendered more-or-less invisible by my signature hooded sweater. But having discovered through sewing the wonder of the long (or rather, long-enough) sleeve, I don’t know if I’ll be able to bring myself to do this ever again.