Remember what I said about the north wind? 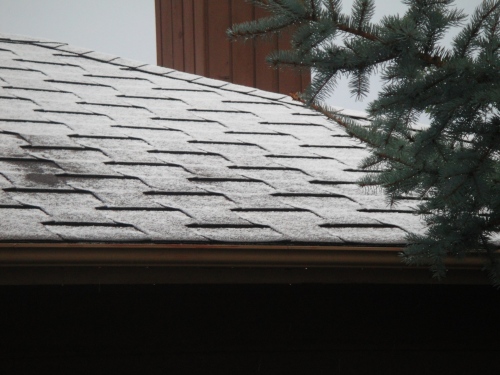 Yes, that's snow on my neighbour's roof this morning.

It didn’t stick, but it still sucked.

Canadian winters are sorta like childbirth. They really suck when they’re happening, but then when they’re over you feel all macho and tough for getting through it (why no, I didn’t have an epidural. Either time.). Except that I only had to go through childbirth twice. Of course, this isn’t winter. Winter’s still a good couple of months off, though with La Nina developing it will probably be a nasty one, unlike last winter, which barely counted. It was nice, but not nice enough to make up for the cruddy summer.

I never have understood why people like fall. It’s my birthday season and I still don’t understand it.

Anyway, that’s probably my year’s quotient of weather-whining for a sewing blog, so I’ll move on.

Other than needing to vent over the snow, I might as well have skipped posting today. The outfit’s a repeat, and the only “sewing” consisted of pulling out most of the seam holding lining to coat to re-position it. There was a lot of swearing involved. It may end up not being possible to wear this coat unbuttoned, because I’m not convinced I can keep the front sides from swinging out. Though I guess if I have to tack down all the inside seams, I will. Grrr. Well, I’m definitely learning a lot. I’m sure if I went to make it over again, I would screw up way less.

Anyway, the daily outfit is a repeat, so bring on the goofy poses:

This is what happens when you turn around to see if the camera's gone off yet.

Have a great weekend!

Tagged as Self-stitched September, too much talk, whining

10 responses to “Remember what I said about the north wind?”